Some Things New Under the Sun. 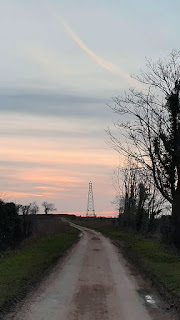 According to a quick search on google, and clicking on the first site that appeared, this year is the Chinese year of the Water Tiger. And apparently this means it will bring a confident and authoritative energy to us all, as tigers are aggressive, tenacious, ambitious, competitive, and strong.

I suppose there is something quite zen about my approach to this "research", and perhaps I lucked out and it's entirely accurate. But I must admit to feeling rather optimistic about this coming year.

Now, this may simply be down to a few factors, such as moving home recently, having my desk at a large window where I can look out over a garden, watching Spring arrive and flowers appear in this garden, a couple of opportunities arising in my job, and several personal events which have all been positive. It could, however, be argued that some of these are the result of the Tiger Year, or it could be these coincidental and seasonal events have shaped my world view.

Does it really matter?

Ultimately, I have a renewed confidence in things. My head is in a good space, and I have several things to look forward to. Sure, the pandemic is still all around, and there are other matters close to my heart and mind which concern me, but overall, things are pretty good.

Once again I have tentative plans for writing, music and publishing. Plans also extend into a few other areas as well. I have some travel plans, some visitor plans (receiving, that is), and social plans. Not all of these will eventuate, but I have high hopes for some of them.

In the Fortean world, I've seen an increase in reports and documentaries on UFOs. And I've seen some state that this year is the year of disclosure, that there will be leaked and official videos and documentation, that this could be the year that governments admit cover-ups and long term knowledge of UAPs and EBEs. That we have the technology, and we have made first contact.

It would be nice, I think, to know that there are others out there. I believe there are. Have they visited us? Do the governments know this? I don't know, but if they do, then it's time to be more open.

Will they disclose? Will I write and sell a story this year? Will my other plans come to fruition?

The truth is out there.

Posted by Steve Cameron at 1:40 PM