Australia Day in the UK. 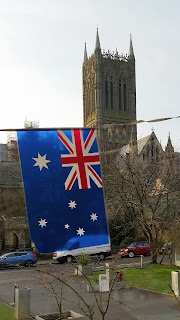 It's Australia Day. And for many Australians, myself included, that doesn't really mean much.

Growing up, it was a public holiday which meant a day off school. But it wasn't a day we "celebrated" as such. No one wished you a Happy Australia Day, we didn't put flags up, we didn't do anything special or eat a particular meal. It didn't really seem to have much depth at all, apart from some civic fireworks or maybe a local 'Australia Day' branded concert or something.

But like Halloween, which also had no real meaning when I grew up, it's starting to gain traction as an event, to become something more than what it was.

I'm not going to get into any discussion on whether the date should be moved, apart from it absolutely should. I'm not posting this as some kind of national pride thing. I'm writing this because I'm currently sitting in a small English village in the middle of winter and some English friends have wished me a Happy Australia Day.

Sure, I have played it up a little. In our weekly meeting at work on Monday, I was asked what was happening this week. Rather than commence with my deadlines and plans, I told them Tuesday was Burns Night and Wednesday was Australia Day, which provided them with a fantastic opportunity to celebrate me as a colleague. Without a pause, our meeting moderator replied, "We do, Steve, every single day."

But I suppose all the posts on social media have made me think a little about Australia. And my family and friends. And that it's still not easily visitable.

The world is a different place since I last visited Australia more than two years ago. It was just before the pandemic, and if I had gone with my original plan to visit in March of 2020, I wouldn't have been back in around 4 years.

I love Australia, and I miss my family and friends, but in some ways I feel more at home in the UK than I do in Australia. I feel a connection with the land here. And I've felt it every single time I've arrived. I especially feel it when I'm up in Scotland.

But I would dearly love to visit Australia sooner rather than later.