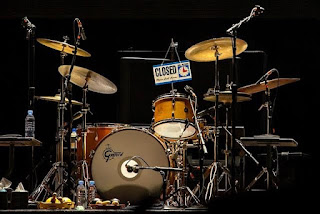 I knew he hadn't been well, and that Steve Jordan had been tagged, with Charlie's blessing, to stand in for Charlie in some upcoming live shows while Charlie recovered from some surgery. And it certainly crossed my mind we might not see Charlie playing again. It was still somewhat of a surprise.

Mick and Keith are the visible Stones, the personalities, the front men. They're the yin and yang, the necessary tension. Music and words, although not as clearly defined there as you would expect. Ronnie is the glue that kept Mick and Keith from ripping each other's throats out, and has been since 1975 or so. Charlie was the foundation on which they were built.

I'll go further than that. He was the heart, and the heartbeat of the Stones, and a true gentleman.

Like Ringo in the Beatles, he was rarely flashy, but he was always spot on - both in timing, and with what was required to make the song complete. Steady as a rock.

I grew up a Beatles fan - from the age of 9 or so. In my early teens, my friends were all a few years older than me, and one of them, Paul, is a huge Stones fan. He lent me Rolled Gold, a lovely compilation with a good overview of their early career. I remember him asking me what I thought, and I told him it wasn't as good as the Beatles because it sounded dirty. He told me that was the point. I still didn't get it.

I was probably about 12 or so at this time, and I simply didn't get them. There were a couple of tracks I liked, but didn't fall in love with. A few years later and I was into them. I bought two albums in quick succession. Let It Bleed, and Get Yer Ya-Yas Out - I can't remember which was first, but both are excellent albums which I played over and over. And still do.

On Ya-Yas, just before Honky Tonk Women, Jagger says "Charlie’s good tonight, ain’t he?" And he was. But I can't think of a Stones recording where Charlie wasn't good. He was always good.

I've been listening to a bunch of Stones albums in the past 24 hours.

Posted by Steve Cameron at 1:09 PM