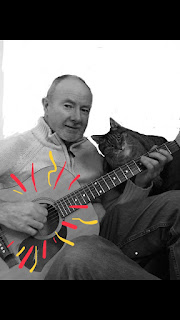 I was told a couple of days ago that one of my closest friends had passed away suddenly. I didn't post or share anything immediately, as I didn't know who knew. Also, I was devastated, too numb to write. And I didn't have the words anyway.

When I started teaching, Jev was my manager (Head of English) and mentor, but we soon became firm friends over a shared love of music, guitars, film, art and books. And, of course teaching. We spent the next 13 years at desks alongside each other until I moved to the UK. We talked about all of the above, obviously, but also everything else, including philosophy and spirituality - both of which were a huge part of Jev's life.

We also became confidantes, seeking advice from each other - both professional and private, sharing ideas and managing student situations as a team. When I messed up, I could always talk to him and trust his advice.

We team taught, and supported each other, often falling in with the other's cues instantly when dealing with students - playing the good cop to the other's bad, the straight man to the other's comedian and so on. Often there would be pop, TV or film references inserted. I almost lost it one day when I was meant to keep a straight face while he was talking to a student. He started gesticulating wildly as he emphasised points. There were others present, but I alone knew he was imitating Gus McCrae, a character from the Lonesome Dove mini-series.

And cards. Almost every day for those 13 years, we played 500s over lunch with wild tales and stories aplenty. We laughed a lot.

Jev loved to draw. He would attend curriculum (and other) meetings and draw comics and cartoons. When he returned from these meetings, I'd ask how it had gone, and he would show me the cartoons which was his way of explaining the mood of the meeting without going into details.

He was a musician, having played in theatre and bands in his native New Zealand and in Australia. He released albums as a kids' entertainer, and then wrote and recorded an album as the Honey Eaters with Natasha-Lee on vocals. He also played on Songdance by Malcolm McNeill, a New Zealand album. I have been told this is one of the best selling foreign jazz albums in Japan.

And, just like Vince Noir and Howard Moon, I would kid him about his jazz leanings, while he told me I feared jazz and joked about my harder rock preferences.

I have lost a great friend. An encourager, supporter, mentor, adviser and confidante.

My thoughts are with his family, his friends, and my colleagues at Moorolbark College.

And Jev. Goodbye, old friend. I have missed seeing you while I've been in the UK, but if there is a great beyond, I look forward to catching up.

He most certainly was. He is missed already.