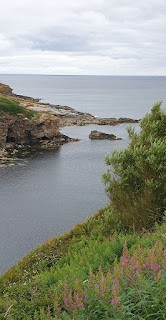 I left Scotland as a small child and grew up in Australia. My younger years were, of course, pre-internet days, and so most of my knowledge of Scotland was gained through books and stories from my Dad and grandparents. In my young mind, it was a magical place, a mythical place. A country where my ancestral warriors once walked, where the loch near my birthplace contained a monster, and where castle ruins dotted the landscape.

Heather and thistles, moors and mountains. A land of barren beauty, but warm and generous people. Haggis, mealy puddings, rowies and black puddings. Accents that sang as they spoke, the Doric with it's own vocabulary and grammar, and music that stirred my soul and speak to my spirit.

I first returned to Scotland 21 years after leaving, and found all this to be true. The land did call to me in ways I didn't understand. It was barren and beautiful and moody. Snow and mists. Wild and angry seas, yet calm and comforting.

One thing I will never forget from that trip was the light. People often talk of the light being different in Scotland, and it is. But it's difficult to describe.

I was there in Spring, but it was cold and misty much of the time. We even encountered a heavy snow storm on our way up from England, but even on a clear day the light was glorious. I remember going into shops and feeling warm and cosy, yet the light through the windows was soft, gentle and diffused. I suppose in many ways it was similar to the light and sparseness seen in Scandinavian dramas which have become popular over the past few years. It's a light I've tried to find elsewhere, but have never been able to.

Last week, I went up to Aberdeen for a few days to visit family. It is, of course, the middle of summer. But it was an odd week, weather wise. For the most part it was overcast and mild, and there was only one day I needed a jumper. And that was the day I walked into a cafe and BAM, there it was. That soft, cool, diffused light I had been chasing all those years. I sat and ate my soup and soaked in that atmosphere. My senses were working overtime trying to take it all in and retain it.

And it was glorious.

That trip away was probably the antidote I needed to the lockdowns here in England. The radio was playing reels and Scottish country dance music which fed my soul. The food and the accents were nostalgic and homey. The scenery was calming, and I felt a connection to the land as it called to me.

It was and still is a magical place. And I loved every second of being home again.

Posted by Steve Cameron at 4:27 PM