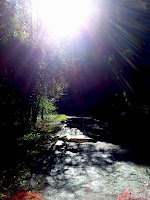 The one piece of advice I continually see from professional writers is the need to read as much as possible. This has never really been an issue for me as I've always been a voracious reader.

As a child I sent many hours in the school library, both hunting for books and reading them - sometimes entire YA novels in my lunch break. I was well known by the library staff and they were very supportive. It was there I saw my first SF books. I loved the look of those Asimov novels with his name emblazoned across the top in block letters over the amazing artwork by Chris Foss. And the fact you could lay the books side by side to make an even bigger picture was a bonus.

The name ASIMOV was rather exotic sounding, and the science part of Science Fiction scared me a little. I asked a friend whether he'd read any Asimov, and once he'd told me he had I asked him whether it was able to be read by non-scientists.

And so I borrowed 'Foundation', and loved it. Within a few weeks I'd started buying SF novels from markets and used bookstores, originally based on the cover art. 'The Tower of Glass' by Robert Silverberg was next, followed by a Philip K. Dick, and so on. It wasn't long before I'd built up a knowledge of the authors I liked, and those I didn't 'get'. It took me many years and several attempts to get past the first hundred pages of Frank Herbert's Dune, for example.

My tastes have broadened. I read a lot of fantasy during the 80s and early 90s, something I haven't done for a long time. And for some reason I mostly read female authors now. I also read a lot of Australian small press - something I didn't even know existed back then.

Which reminds me. I need to catch up on my Analogs, Asimovs and F&SFs. I'm a few months behind. It's time to take a break from the non-fiction I'm currently reading.
Posted by Steve Cameron at 10:30 PM