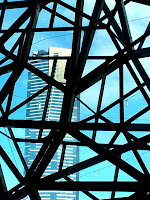 Was it simply once or a couple of occasions blended together in my mind?

My memory tells me it was all on one evening. I was at my friend's house. Paul is his name, and I regret that he lives interstate and we rarely see each other. Glenn was there too. Paul and Glenn were a good few years older than me. I was 17, they were in their mid 20s, and they loved to play me music that I'd never heard before, which accounts for my tastes which are ten years older than they should be. While my friends at school were listening to crap, they were making me listen to Slade, Iggy Pop and Larry Carlton.

But this night, which seems to be indelibly etched in my mind, introduced me to to three of my favourite gospel albums.

Yes, I grew up in a Christian home, although my beliefs are now closer to a philosophy and lie somewhere between Christianity and Buddhism.  But in those days I was listening to a fair amount of Christian music.

Don't knock it. This was before the uber-commercialisation of the genre. And some of it was pretty good.

But this night, this one night, Paul played me a new album he'd found. He told me it was a country and western act, which was something I hated at the time. He was lying. He  showed me an album - blue, it was, with bright garish birds on it. Resurrection Band.  The album was called Colours, spelled the correct way, which was unusual for a band from Chicago. He dropped the needle on Autograph, and it blew my mind.

I'd heard Randall Waller before, live, when he played solo acoustic with Larry Norman (or was it Randy Stonehill) in the late 70s. But then Glenn played me Midnight Fire, produced by John Linn. What an amazing album, with superb production. It's still on my playlist.

Glenn then played me a track he thought I might like because I was such a huge Beatles fan. It was 'Out Across The Sky' by Daniel Amos. John Lennon indeed.  Then he played me the rest of the album, Horrendous Disc.  Kind of a hokey cover, but I've been a massive Daniel Amos fan ever since.  Yes, they are still playing and recording, and I have virtually everything they ever put on tape.

Was it one night? Two? Three?

Glenn has passed, and I'd love to be able to spend an evening with him. Paul lives interstate, and I don't see him often enough.  But their influence and legacy remains.

Thanks, guys.
Posted by Steve Cameron at 9:33 PM