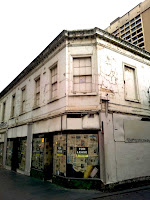 I rarely recognise my progress as a writer. It often feels as though I'm stuck on a plateau.

When I was living in Japan I visited home about once every eighteen months. On such trips I would comment on how much my nieces had grown. My sister was usually surprised by this, as she'd not noticed it to the same extent I had.  But then she'd been with them daily and not noticed the gradual growth.

Recently I've had to edit a piece I originally wrote a couple of years ago. Sure, it had been through a couple of rewrites since then, but I'd not read it since last year. I was amazed at how many flaws I found in the piece. Since it is slated for publication and had already been accepted (and been through an editor), I had to resist the urge to rewrite entire chunks of the story.

Don't get me wrong, I still think it's a good story. But I was able to recognise exactly how much I've learned in the past six months or so. And how my current writing has improved.

It is worth revisiting your past.
Posted by Steve Cameron at 12:42 AM