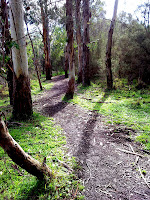 When John Lennon was five years old, he was put in the position of having to choose between his parents. His father, a merchant sailor home from sea, had taken him away for the weekend with the intention of absconding with him. His mother caught on, and there was a confrontation where John was asked to choose which of his parents he wanted to stay with.

He chose his father. And it was only as his mother was walking away he changed his mind and ran back to her. If that had not happened, John may have become a New Zealander and The Beatles might not have happened.

About a year ago I considered writing a story set in an alternate history where this occurred. I just haven't got round to it yet.

Josh Rountree took a similar premise and had John move to Texas as a teenager, only to fall under the spell of Bob Wills and become a country great.  Wills is a musician I had not previously encountered, but since reading the story I've fallen under his spell also.

Rountree's story, Can't Buy Me Faded Love, is the title story in his collection. If you love music and spec-fic, then I would thoroughly recommend this book. Each story comes with liner notes and a recommended playlist. It's fabulous.

I also recently read Snodgrass, by Ian R. MacLeod, which is another Lennon alternate history This time 50 year old unemployed Lennon ponders his life and what he could have been had he not fallen out with McCartney and left The Beatles. "We could have been bigger than The Hollies," he declares.

And then there's I Was The Walrus, my John Lennon re-incarnation story, which was published in Eric J. Guignard's collection, After Death, and had been receiving great reviews. Three John Lennon spec-fic stories in as many months. Anyone know of any more?

Last night I had a dream in which these three stories were published together and did very well.  How about it, guys?
Posted by Steve Cameron at 10:26 AM