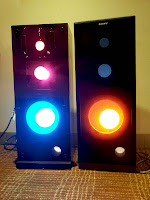 In my last post, last Sunday, I questioned whether I'd ever be able to find the elusive 'X-factor' that pushes a story head and shoulders above the others.

A couple of hours after writing that, I went to SuperNOVA, my writers' group. I had submitted a story for crit, and was rather looking forward to it. Nobody savaged my story, most people seemed to like aspects of it, and everyone had advice that was pretty good.

But one of my fellow writers, who has previously read slush for a well know magazine, suddenly said "This is a good story. One that I would have pushed up to my editor. But not one that would have excited me enough to text him straight away." (or words to that effect.)

Had she been reading my blog? She did a pretty good job of explaining to me where the story was lacking, along with the others, and the scales fell from my eyes. I could actually see what they were saying, and damn them, they were right.

It never stops, this learning thing, does it?

Now to rewrite the story with what I've learned.
Posted by Steve Cameron at 12:11 PM