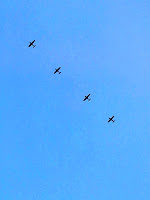 A few weeks ago I received an email from a writer I don't know, asking me to buy their e-book. Actually, when I re-read the wording, they were begging me to buy it. Only $2.99 for five stories. And please let them know what I think.

I checked out this writer, and discovered on their blog that all of these stories had been rejected everywhere. And so the writer decided all those editors were completely wrong, and that these are fantastic stories, and not only does everyone deserve to read them but we should have to pay for them.

I did consider replying and asking whether this writer had purchased any of my work. I also considered asking them why I should pay $2.99 for five stories that had been rejected everywhere, probably hadn't been through an editor, and from someone who needed to go begging for customers. Especially since I can buy an issue of Asimov's or Analog for the same price. Not only have those stories been selected by a team of staff, but they've been put through an editing process. Oh, and they include more than just five stories as well.

In the end I deleted the email and ignored it.

But again, this is the reason I don't self publish.  I'm not against it in some cases, but there's just so much average stuff out there. Even the good stuff finds it hard to break through the flood of whitenoise.

And if the fact I was being begged wasn't enough of a deterrent, then spelling  and grammatical errors in the blurb isn't going to win me over.
Posted by Steve Cameron at 4:39 AM