The Truth Is Out There? 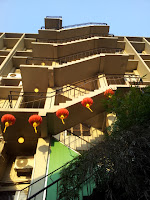 I'm thrilled that there is still some mystery in our modern world.

A species of whale that was discovered in 1872 through bone fragments, the Spade-toothed Whale, has recently been seen for the first time ever. Two were washed up on a New Zealand Beach, and were originally thought to be another species altogether.

And now there's new footage of Bigfoot. Filmed by a couple of American campers, we see a black shape through some trees, which then stands up. At that precise moment, the person taking the film decides to stand up, or move, or something, because we get no more of the creature.

And the tomb of an Egyptian princess has been discovered in Cairo. 4,500 years old and, it seems, in great condition.

All of these are fodder for the imagination and for my writing.

But there are more enduring mysteries.

Who sent me that hate mail back in 1985, or the valentine's card in 1982? And what about that postcard, completely blank apart from my name and address and the MOMA logo, from New York? It arrived at my home in Japan, and I still have no idea who sent it or why.

Anyone?
Posted by Steve Cameron at 9:51 PM