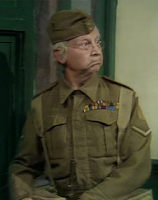 Growing up, one of my favourite sitcoms was Dad's Army. My Dad loved the show, and I fondly recall watching it with him. Unlike many other shows from that era, it has stood the test of time. It's still funny.

Clive Dunn, as Lance Corporal Jones has passed away, at the ripe old age of 92.

He not only served during WW2, but spent four years in P.O.W. and labour camps in Austria. Famed for his catchphrases of 'Don't Panic!' and 'They don't like it up em!', it appears as though he was a real gentleman who always had time for the fans.

Dunn passed in Portugal, where he lived after retiring.