No News Is No News. 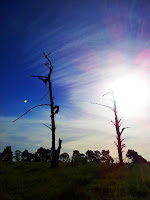 No real news on the writing front this week, apart from the announcement of After Death's TOC.

I have quite a few other stories out in the wilderness - some of which I have high hopes for. Of course I love all my stories, and generally have hopes for them, but I have really good feelings about some of these stories with these particular markets.

At least I haven't heard anything back from them yet. Several of my stories are still with editors, while other stories (from other writers) which were submitted more recently have already been rejected, according to Duotrope.

This, of course, bodes well, doesn't it?  It means the stories are still being considered, and appear to have made it past some arbitrary first round. Or maybe they're not being read in order, and will be rejected any moment now.

There is always the danger of reading too much into Duotrope's figures. You can't read anything into silence. As an online friend of mine, Martin L. Shoemaker, is wont to say, No News Is No News.
Posted by Steve Cameron at 11:20 PM