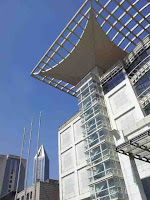 I recently became involved in a discussion on self-publishing, and so I thought I'd try to articulate my thoughts here on how it relates to me.

I'm certainly not ready to self publish. Before I do I want to be able to maintain a consistently high standard and since I'm not yet selling regularly to semi-pro markets and above....

I know a couple of people who sub stories all around to different markets, and then once it's been rejected everywhere, they self publish. My thoughts are that if the story has been rejected everywhere, then there's probably something fundamentally wrong with the story. Writers (myself included) are notorious for not seeing faults in their own work.

Some of these writers suggest that a couple of bucks is a fair price for their short stories - the ones that have been rejected by all the major markets. I respectfully disagree. Not when I can pick up an anthology like this as an e-book for $8.48. Twenty eight stories, by some name writers, all of which have been through a quality-control gatekeeper and a decent editing to within an inch of their lives.

I've also been disappointed by virtually all the self-published work I've read. Usually they're not particularly good and the lack of proper editing gets in the way.

Of course I'm not referring to work that has been previously published and the rights have now reverted to the author. That is a different matter, and it's an excellent way to keep works available. And I'm not referring to writers who have honed their craft and built their reputation to the point where there is some assurance of quality.

I've been advised that self publishing even a bad story won't harm your reputation, and at the very least you'll make a few bucks. Again I disagree. There are a few writers out there whose work I avoid, based on a sub-standard piece of work. Give your readers some credit for intelligence. And a memory.

If you want to self-publish, then great. Go ahead. It's just not for me. Not yet. I still want to build my craft to the point where editors regularly want to buy my work.
Posted by Steve Cameron at 8:38 AM