How Will I Know? 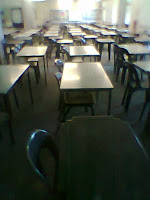 This is a question that bugs me from time to time. And, after the rejection I mentioned last week, it's one that's been bugging me again.

Most people believe they can write. Most writers think they can write well. I often see writers who aren't selling discussing what they could have 'tweaked' in their story that would have lifted it to a sale. And there are those who never sell that think the world is against them, and that the slushreader just don't 'get' their writing. Sometimes these people count their rejections and proudly advertise the number as a measure of success.

OK, I haven't sold heaps of work yet, and like most people I'm probably blind to some of the flaws in my own writings, and I don't write anywhere near as much as I should, and why should I think that I can even write?

If a slushreader doesn't 'get' your work, what makes you think a reader will? Slushreaders are readers, and they see a far wider range of work than most casual readers. Yeah, OK, they make mistakes (and I KNOW they've recently made  mistakes a few times in rejecting MY work  - hehehe) but generally if your work is so good, it will sell elsewhere.

The tweaking thing. I've referred to this before. I call it the Feng Shui of writing. If I'd changed the character's name to Jeff, or chosen a better title (or hung a mirror over the sofa) then maybe it would have sold. I figure if the story is 'almost, but not quite', the editor will ask for a rewrite, or suggest changes and invite a re-sub. (And this actually happened to me a couple of weeks ago.)

Most people think they can write. I know this is true - as many people who never write tell me they plan to, and will one day soon, and then they'll sell lots and they'll be able to quit work and...  Any of you who do write knows how many times people tell you this. And you also know how not easy it is, what a slog it can be and how long the sub and sale process can take for so little financial reward. As a teacher and a writer, I read an awful lot of stuff from people who believe it's brilliant. Usually it's not. Some work never sells simply because it's crap. Be aware that your work maybe isn't of the standard you think it is.

Counting rejections. I keep track of my rejections, and I do count them. But they're certainly not in the hundreds. And I know of people who brag that they received X amount of rejections this year - as that was their target. OK, so that works for them. My goal wasn't to have a certain number of rejections, but to make three sales or more this year. (And I achieved that). Next year it's to make five or more. Anyone can receive a certain number of rejections, just submit your work to every market out there and start counting. In and of itself, it's not a measure of success or even progression. It's only a measure of submission and rejection.

Only three sales? Yes, but three sales I'm proud of, and to markets I'm thrilled to be in. I could have sold more if I'd been less fussy with my submissions, but early in my writing 'career' I decided against 'token' or 'for the love' markets, and aimed squarely at semi-pro. I worked out where my writing abilities lay and subbed to those markets with the intention of moving up. Quality over quantity. And while I know it works for some people, this is the very reason I don't do NaNoWriMo. (Plus November is when I get tied up with school stuff, reports and other deadlines) It's also the reason I choose not to self-publish the stuff that didn't sell.

So, why should I think I can write?

I have experience and training. I'm an English teacher in a High School. I teach writing, language analysis, contextual work and literature. I have an Arts degree in English and Drama, and an Education degree in teaching the same two subjects. I've also been a voracious reader since I was a child. I can recognise good writing, good dialogue and plot, and know why it's good. I also understand when it's not working.

I've been told I can write. Not just by my mum and friends, (and never listen exclusively to them!) but (over the past few years) by my critiquers, which has included literature teachers, other writers at my own level, and even professional writers. I've had a few editors and writers (people whose names you would recognise) tell me which aspects of my work they've liked. OK, so they didn't always take the story, but they spent time telling me why. (Might I point out I never asked - they offered comments in these cases.)

I'm getting sales. Not lots, but some. And at the markets I was aiming for. I haven't yet sold to Analog or Asimov's, or even Ticonderoga. But those publishers are firmly in my sights and I have strategic plans to reach those goals. As they say in advertising, Watch this space.

So what does this mean for others?

Probably not a lot. You want to write? Then write. And submit, and prepare to receive rejections. Then don't give up. Take the time to think about why you are writing and what your goals are. With my senior students, I give them the following four points to consider in regards to their studies.
Any monkey can get published. Write something, start a blogpage with a snappy title and post it. TaaDaa! Published.

Not that there's anything wrong with that if that's what you want. Or with any other publication and format. Just make sure it's something you want. Me? I want to be published in magazines and anthologies from publishers that I respect, and hunger for them to accept my work. But also be realistic about it. Are you really going to send everything you write to the big three? It will most certainly bring the rejection tally up. As mentioned above, I aim my work at the level I believe it is. If I'm not selling regularly at Semi-Pro, why would Pro markets buy it?

But I'm still developing and improving. And I do have a piece at a pro market that I have hopes for. And as I also said before, keep watching this space.
Posted by Steve Cameron at 4:16 AM