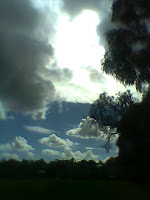 After a week of waiting followed by a week of good news, this week's news has been mixed. Some good, some not so good.

I reported last week that one of my stories had been sold - which was great, and I'm still very excited about that. It was a market I'd long hoped to crack (more news when I can) and a story that I had high hopes for.

The following day, however, a different story at another market I've long hoped to crack (with a story that I was almost certain they would take) was rejected. And with it my self confidence plummeted for a day or so. It's funny how it affects you like that. Don't worry. It's already subbed out elsewhere, and I know it's a good story that will find a good home.

So I was surprised when yet another market that I've long hoped to crack (Yeah, I have a list of about 5 semi-pro markets I'm aiming to 'infiltrate') placed a hold on a story that I thought had absolutely no chance there.

Now all they have to do is love it enough to buy it.

By the middle of the week things had definitely taken a downward turn, when I read that Paul Haines, my mentor and friend, had announced that he had reached the end of his writing career. Paul's cancer seems to have stepped up its attack on his body. And like so many others, I send my love and positive vibes to Paul, Jules and Isla and wish him well.

By the weekend a feeling of dread overtook me, as I realised I had to finish writing my students' reports by Monday. Slightly ahead of marking, it's the one thing I hate about teaching. But everything in life is a compromise, and if I want to teach, then I have to assess and report. Sigh.

But yesterday my wife and I put up our Christmas tree, and spent a few hours making pickled onions. And last night, as I sat in the darkened living room watching a DVD with my wife and two dogs, glancing over occasionally at the twinkling lights in the corner, smelling strangely of onions and pine, I realised how little I have to unhappy about.

And despite the rejections from markets that I considered a 'sure thing', my writing and publishing is moving up.
Posted by Steve Cameron at 11:27 PM