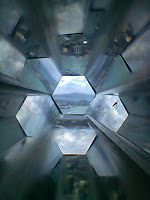 I've been thinking about heading up to Sydney for the launch of Coeur De Lion's anthology,  Anywhere But Earth. It looks like this will occur in November, but I'm waiting for confirmation.

I'm also planning on heading to Canberra for Conflux in October.

Conventions have served me well, over the past few years. I've met a range of interesting people with whom I have regular communication, I've met and become friendly with a number of publishers, editors and writers, I've attended workshops that have improved my knowledge and writing and, most importantly, I've made friends in areas (both writing and SF fandom) that often tend to be insular activities.

Never underestimate the value of networking.

The important thing to remember, though, is to be genuine, be polite and to give as much as you take.

I've seen a few people who seem to head straight for the 'important' people, and totally ignore us small people. I've also had famous writers whose work I own ask me if I'd like to share a meal with them.

I saw Lee Childs on The First Tuesday Book Club, and he said this.


Well, what I found is that every single thing sells books. Everything you do sells books. The question is, is it economically effective? I mean, I once met a fan who had all the books, wanted all the books signed, and sometimes I ask them, do you remember why you picked up this book? And she said, "I saw you at a conference and you opened a door for somebody and I thought, what a polite gentleman. I'll try his book." Every single thing works.

Manners and presentation are vital.

I know of a couple of writers whose work I haven't bought simply because I've seen them be rude, or present poorly at public events.

If you get along to the Anywhere But Earth launch, look for me.  I'll be the one who isn't saying anything, but standing looking like an idiot with mouth agape. After all, I'm still stunned  to be included in that book with writers I admire.
Posted by Steve Cameron at 3:22 AM

Ah, Conflux - it's definitely on my 'Things I must get into the habit of doing' list. Have fun. And enjoy the ABE launch.

This is my first time up to Conflux - a convergence of moons meant it was the right time for me to go.