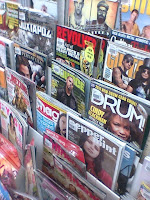 I understand what they're saying, but I don't have time to take on slushreading.

As for seeing how well other people write, I do that anyway. I read a phenomenal number of books and subscribe to three or four magazines. And as for the mistakes side of it, well hey - I teach English in high school.

I love my writing, but I'm a little concerned I can't devote enough time to it now - never mind taking on the responsibilities of slushreading. I have the greatest respect for people who are prepared to take on this task - and this is despite the completely inane, childish and unsophisticated comments I've received on stories from a couple of them. (And I must point out it was only a couple of them.)

Also bear in mind that as a writer I'm frustrated by the amount of time some of these markets take to reject a story. I've got one story now at its third market - the first two submissions took eight months each to respond. And as I currently don't have enough time to take slushreading on properly, I'd feel guilty about contributing to delays for some other writer.

Over this current two week period I have around 105 essay to marks, 50 short stories, 50 posters and two novels to read, study and be ready to teach next week. And that's on top of the normal preparation I need to do for my classes. And somewhere in between all that I'm also trying to have a life, write a couple of my own stories, edit a couple more that need it, and research markets and submit.

I think I read enough examples of both good and poor work to more than make up for it.
Posted by Steve Cameron at 1:24 AM