Four Down, Thirteen To Go? 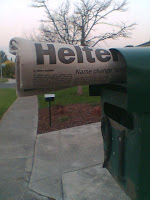 Writers of the Future has finally announced the winners from Q1, and I must say I was pleased to see Brennan Harvey's name in first place. I wrote a little about him back in April. good to see he just kept submitting. Congratulations, Brennan - and well done to the others.  I, of course, missed out again - but we already knew that.

I've been reading Iterations, by Robert J. Sawyer. I enjoyed it, but I must say I much prefer his long fiction to his short stories. There was, however, one part of the book that I think is essential reading for every budding writer.

In his introduction to the story Lost in the Mail, he mentioned the history of the piece. Not only did it come second place in the Aurora Awards, it also got rave reviews and was selected for reprinting in a number of Anthologies. But it was only originally published after he received 17 rejection slips. Seventeen!  At that stage of his career I'm fairly certain he'd have been submitting only to pro-markets, and yet 17 editors saw fit not to publish a piece that went on to do so well.

So there is hope yet for some of the pieces that I and others hold in high regard. The scary thing is that with the apparent current trend of editors taking 7 or 8 months to respond (even after polite email enquiries) seventeen rejections means it might take 14 years to get this particular story published.

But that's OK - I have to accept that's the system. It'll be worth it in the end, and I still have plenty others simmering along nicely.
Posted by Steve Cameron at 3:31 AM