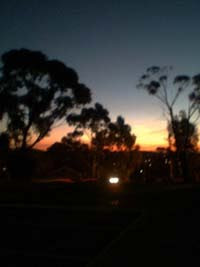 A few years ago, I bought The Bitterbynde Trilogy by Cecilia Dart Thornton.  With every intention of reading them soon thereafter, they were placed in the metaphorical stack of books next to my not-so-metaphorical bed.  For a number of reasons, none of which seem particularly clear at the moment, I've never gotten around to reading these three books, The Ill-Made Mute, The Lady of the Sorrows and The Battle of Evernight. (OK, so the last one sounds like it should be a Led Zeppelin song....)

On Friday night, I wandered down to the Melbourne Science Fiction Club where Cecilia was the guest speaker for the evening. After catching up with a few familiar faces, I settled down to listen to the amazing tale of how she became a full-time writer. None of this is secret or new as it's easily found online, but it's incredible hearing the tale direct from the source. Basically she wrote the three novels for herself, stuck them in a drawer for a couple of years before finally putting a sample chapter online with a crit group.  Within a short time an editor had contacted her, she had an agent and a U.S. publisher paid her a six-figure advance for her books. It's always good to see a local do well, and while I realise her story and success is the exception rather than the rule, it is encouraging and inspiring.

Cecilia was completely lovely and charming. She answered our questions patiently (I'm sure she's heard all of them before), laughed at our lame jokes and smiled and nodded politely as the conversation diverted wildly off-topic. I learned a great deal from her professionalism and her attitude. I truly believe it's important for a writer to present well and to always behave professionally. Earlier this year I attended a publishing seminar where I was left completely unimpressed by several of the presented authors.  They weren't particularly articulate, didn't seem to have much to say and were generally repetitive and used extremely well worn cliches. Two of them arrived dressed as though they'd just spent the day working on the car. And this was for a large gathering of teachers at the offices of a major publisher that was trying to convince us to buy these books for our schools.
An author as successful as Cecilia doesn't have to guest at a small SF group like ours, but in the SF and F world this is what authors do.  They all seem to be fanboys and fangirls deep down, and they can recall when they would read this stuff and wonder. They used to be like us (and still are at heart!). Cecilia even talked about the fan letter she once sent to Tanith Lee.

I've never sent anyone a fan letter, but I've often wondered exactly what some of my 'heroes' would be like in real life.  Over the years I've been fortunate enough to have met a few names, but there are some I can only wish I could have met. It's too late now to meet people like Asimov, or PKD (I still marvel at hearing a PKD story firsthand from Chelsea Quinn Yarbro) or George Harrison, although there are still a few people in the literature and music world I would seriously love to meet.  Robert Silverberg is high on my list, as are Andy Partridge and Terry Scott Taylor. And from what I hear Tim Powers has a few PKD anecdotes up his sleeve. I need to win WOTF so I can attend one of his workshops, so I'll just keep writing and submitting. And I'll keep reading in wonder.

Oh, and I've just dug out the Bitterbynde trilogy and pushed it to the top of that metaphorical stack. I'll get into The Ill-Made Mute as soon as I finish my current WOTF volume.

Hi, it's a very great blog.
I could tell how much efforts you've taken on it.
Keep doing!

I'm glad to know at least one person is reading. LOL