Aim For The Stars. 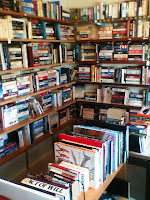 Last week, while down in Rye, I was able to find a couple of Op Shops (or Charity Shops as they are called in the UK) with semi-decent books for sale.  Yes, I picked up a few, but that’s nothing new.  I always do. But as I perused the pictured shelves, I realised just how many books existed by authors I’ve never heard of.

I know of quite a few authors.  I teach English at a College. I have a degree in Literature, and another in English Education. I’ve spent three years working part-time in a bookshop, funding my way through University. I’ve also spent half my life browsing these shops. And yet there are literally thousands of authors with published books that I don’t recognise and that no-one really knows.

Writers like J.K. Rowling and Dan Brown are the exceptions, yet people presume that if your name is on a book, you’ve made money. Very few published authors get to make their entire living by writing novels alone.

I remember one day when I was working in the Uni Bookshop, a customer came in looking for a book on how to write a screenplay. I asked him if he had a great idea that he needed to get down.  He told me he didn’t actually have any idea yet, but surely writing a screenplay would make him very rich and he could quit work.  I told him that perhaps he needed to look into the publishing and film world a little more closely.

I sold him a book anyway.

Looking at some of those names on the bookshelves, I wondered how many of them made a living from their books. I guess at some point they were all thrilled to be published, and, thought they were ‘on the way’.

Did people buy those books?  Were they remaindered within the first six months? As writers we can’t afford to rest on our laurels, seeing your name in print, seeing your writing on a shelf somewhere, even being recognised or commented on by someone.

I guess we need to have a series of goals, each one higher than the previous one, and just keep working towards them. I know what I want. I'll keep shooting off stories to Writers of the Future. And as an old friend of mine once told me, ‘Aim for the stars, even if you only hit the chimney.’
Posted by Steve Cameron at 12:55 AM