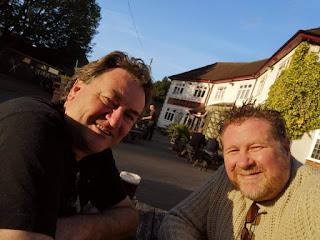 My friend, Andy Remic, passed away just over a month ago. It wasn't unexpected, although it was sooner than we'd thought.
It was a couple of coincidences that brought me into Andy's orbit. We shared several interests, and both loved writing. Andy, of course, was a well know SF and Fantasy writer with a string of credits to his name. I'm just a guy who sells the occasional short story. But Andy treated me like a peer. He not only taught me a great deal but asked my advice and opinion. Due to circumstances, Andy didn't write for a few years. But when he did return to writing, with a short story for Grimdark Magazine, I was thrilled when he asked me to crit it for him. I was really pleased he incorporated most of my suggestions.
We talked of collaborating on some fiction, but time got away from us. Andy started writing a script - I have the early draft here somewhere - and was planning to film a series of short films featuring us both. But in the past few years, Andy's focus was on film-making. He made a series of documentaries on the early days of computer games, mostly centred around the Spectrum, one of his great loves. Writing wasn't abandoned, though, as he had started writing another novel, incomplete at his passing.
We weren't able to see each other too often in the past couple of years, mostly due to the pandemic and especially with his vulnerability due to his medical conditions. We planned to catch up, but it was close to two years before I saw him one final time.
I was privileged and thrilled to be invited to his wedding a few months ago. I think like many people, I was surprised at his changed appearance and physicality due to his illness. We managed to grab 20 minutes to chat at the reception. And that was fantastic. We didn't speak about his illness at all, except when he mentioned his discomfort. We spoke about life, film, Philip K Dick, teaching and writing. And beyond his appearance, there was an even bigger change evident.

Andy was a straight-talker. He had no time for people who were dishonest or messed him around, and he could be quick to see red. There were a couple of times at conventions, for instance, where I'd have a quiet chat to try and calm him. And since I'd known Andy, there were certain events and people towards which he was angry.
But at his wedding he was the calmest, and most serene I'd ever seen him. He seemed accepting of much of what had happened to him. I sensed he had forgiven much and felt comfortable. He told me that he was progressing with his new novel, and that he was in the right headspace to be writing. He told me he was past the anger he had held. And he told me it was all due to his new wife, Linda.

Andy told me how much Linda meant to him, that she was his rock and had eased the anger from inside him. He told me how special she was, and that he didn't know where he would be without her.

Don't get me wrong, he also spent time talking about his boys, how much they mean to him, and how proud he was of them. But when he was talking about Linda, it sounded almost as if she had saved him.
And my heart aches to see Linda going through all this.

Andy was my friend and my writing mentor. Just yesterday, my Facebook memory was:

Despite his nagging, just spent a fantastic afternoon in the company of Andy Remic. Talked books, writing, publishing and music amongst other topics.
Once again I leave feeling inspired and having learned so much.
Thanks, Andy.

Yeah, he always nagged me to write a novel - sometimes loudly and in front of other people. He always said good things about my words.

Tomorrow is his funeral, and although invited, I can't go for reasons beyond my control. And I'm absolutely gutted. I want to be there to remember, to celebrate his life, to mourn his untimely passing, to wish him Godspeed, and to be with others who feel the same way.

I'll be doing all that, but from the comfort of my home.

Thank you, that's so lovely and brought some happy tears.