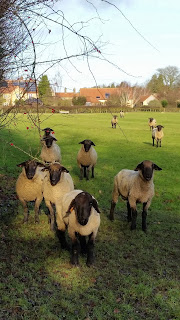 The new year has brought heavy sleep. Although I set my alarm for 6.30 am, it has actually only woken me about three times in the past two years as I seem to automatically wake about 30 minutes before it goes off. The past couple of weeks, however, I have regularly slept until 7.30 or as late as 8.30. And then on my first day back at work (alarm set, of course) I woke at 6.05. I think the back of my brain instinctively knows I need to get up for work.

And it has, for the most part, been deep sleep. Much deeper than I usually have.

I think this is partly the time of year, as we have very short days and long nights. Partly it was my body recharging after a year of work and the trip down under, and partly just because I could sleep in and didn't have to get up.

Interestingly, this has brought vivid dreams as well. I won't give too many details or specifics as I know some budding psychology students will do their best to psycho-analyse me.


And last night, for the first time in ages, I had a lucid dream. I really enjoy these, as I can explore and create adventures. I can never control every detail, but can at least guide and direct them. Last night's, however, was very unusual. At first I could control it, but then it wouldn't permit me to do what I wanted, or anything. Instead I had an experience that I didn't expect. Something I'm still trying to understand. (And no, I won't share - see the comment above about amateur psychologists)

I have looked at dream interpetation books and websites in the past, but they generalise. You dream of a goldfish, it means this.  But what if the dream was about a goldfish that was blue and 20 feet long, while riding a bicycle?  Surely that changes all the meanings.

Or sometimes, a cigar is simply a cigar, and dreams are purely our brains re-organising memories and creating narratives to entertain us. Whatever they are, I sure enjoy them.
Posted by Steve Cameron at 11:44 AM