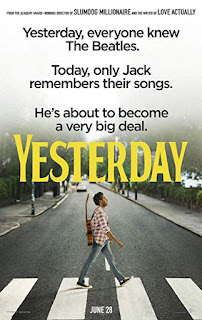 As a Beatle freak, I'm sure many expected I would rush to the cinema to see Yesterday, the latest Danny Boyle film. I love a lot of Danny Boyle's work - Trainspotting, Slumdog Millionaire, 28 Days Later, Sunshine and even caught his stage production of Frankenstein in London.

The cinema is no longer the cheap pastime it once was,  and so I save my trips to the cinema for the spectaculars, those films which need to be seen big. Star Wars movies are a prime example. Unfortunately, everything about Yesterday screamed 'Saturday Afternoon DVD'. I had only seen a couple of reviews, had no spoilers, but the marketing and the one short clip I saw on TV suggested this had little to do with the Beatles.

It was pleasant enough, or as Douglas Adams might have said, mostly harmless - a straightforward rom-com with some Beatles music as background. The writer, Richard Curtis, made no attempt to explore the social implications of a world without the Beatles. Even when the main character (and I've forgotten his name) goes to visit John Lennon, they spend seeming hours walking on a beach discussing a quiet life. Not once does he ask if he played music, wrote songs, ever played in a band, knew a guy called Paul. Not once.

Much like the guys in Coldplay, Ed Sheeran seems like a nice guy, but, unfortunately, he can't act. In much the same way Coldplay's music doesn't appeal to me, neither does Sheeran's. His songs are nowhere on the same level as anything by the Fab Four.

I guess my biggest concern was that nothing else in this parallel universe seemed different. While the Beatles didn't create the 60s, they certainly surfed the crest of the wave - appearing as though responsible for much of the change that occurred. But surely there would have been other differences if they never existed.

Would music have developed the same way without their influence?  Remember, at that time bands didn't write their own material, and guitar groups were on their way out.

Another point. Everyone seems to pause when hearing a Beatles song for the first time - overcome by the instant brilliance. Much of the Beatles music is contextual, rooted solidly in the time it was written and recorded. Would those songs still have the same impact if they were new nowadays? And that main guy (still can't remember his name) goes from playing empty pubs to festivals in what seems a few weeks.

Overall, a pleasant little film. Curtis and Boyle could have been more insightful and incisive but chose to play it safe. Not one I'll be adding to my Beatles collection, or ever watching again.
Posted by Steve Cameron at 8:04 PM