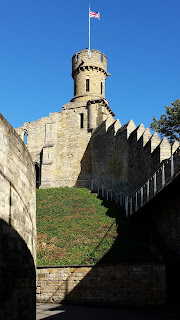 Did I mention I have a new story coming out? I'm just not sure when.

I sold it earlier this year, and I think I blogged about it at the time. It's a good fantasy story - which isn't a genre into which I delve all that often. I originally wrote it for a themed anthology - unfortunately, I had missed the words "urban fantasy" in the original guidelines, and there was nothing urban about this fantasy. Once the submission period had closed, I realised my error. I emailed the editor, apologised, and asked for the piece to be withdrawn.

At least I looked like a good guy in front of that editor.

It's had some close calls at some really good markets - received positive personal feedback at a pro-market, but never quite got there. Until this sale.

The editor likes it. He told me so. He also suggested it might end up in either an anthology in October, or a magazine in January. Well, it's almost October, and I haven't heard anything, so I guess we'll see it at the beginning of next year.

Keep your eyes out. I'll let you know when it's out.
Posted by Steve Cameron at 6:21 PM