Home Is Where The Heart Is? 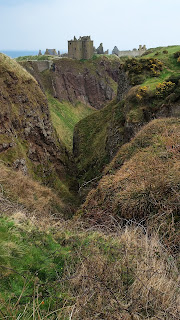 Some of you may not know I am actually Scottish by birth, not Australian.

True, I sound like an Australian when I speak (although my accent is not as strong as many I know), and I prefer AFL and Vegemite to Soccer and Marmite, but I was born in the highlands and emigrated to Australia as a small child. I've been naturalised, so I have Australian as well as my British citizenship.

As a child I wondered what Scotland was like. We didn't have the internet then, so my knowledge was limited to encyclopedia entries, pictures on postcards, and wild imaginings based on stories by relatives. This, of course, led me to believe such things as all Scots children walk 16 miles to school each day in snow 6 feet deep. I think I had my dad to thank for that one.

As I grew older, Scotland continued to call to me. I was proud of my homeland and its history. It was an almost mythical place, and I yearned for any connection. From books and movies to music and food, I lapped it all up. And then, in 1985, I returned for the first time since leaving as a 'wee bairn'.

I was not disappointed.

Scotland was truly beautiful. It was a gentle, peaceful country with generous, funny people. I felt at home, and I remember telling my parents that one day I would return to live in the UK.

I am pleased to report, that after spending the past two weeks on a road trip, Scotland is just as beautiful and the people are still the same.


We drove from Aberdeen, my father's hometown, through my grandparents (both sides) hometowns (Buckie and Cruden Bay), saw the house where my mother was born, caught up with second cousins, visited a fantastic museum which has photos and information on the trawlermen on my mother's side (including my grandfather and his brothers) and stayed for a couple of nights in Inverness, the city where I was born. We toured through the highlands, lonely, desolate, magnificent mountains dominating our landscape.

We drove past Culloden, where the Camerons fought exhausted after marching 50 miles in two days, and Cawdor, which is only a few miles from my birthplace. I guess I could have been a thane.

Macbeth too (in the play, anyway) was based in Inverness. I could have been a king.

And, of course, Loch Ness. Don't even mention I could have been a monster. You don't think I spent half my childhood hearing that one?

This has been an important time. A time of reflection and appreciation for my relatives and ancestors. A time to consider what was and what could have been. A time when I felt a connection with the land around me.

Mostly, though, it has been a time of gratitude.
Posted by Steve Cameron at 2:30 AM

Nice post.Thank you so much for sharing this post.