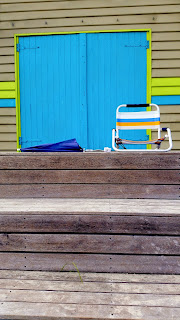 The weekend was hot. 36c both days. Fortunately for me I was down the coast with my wife.

The foreshore was lovely. Crowded later, but we went out before it got too warm while there weren't too many people on the sands. The weekend was brilliant. I drank cold beer, ate prawn pasta, nachos, read a lot and generally just relaxed. Then to finish it all off, breakfast this morning was amazing.

So I was playing some music as we drove down there. My wife made some comments about the song, and bam - I wrote the opening to a story in my head.

An idea is not a story. Nor is an opening. And I had nothing more.  But I started playing with what I'd written, wrote a few more lines before I needed to know where I was going next. I opened a few files, a few unfinished scraps I'd written in the past, things I thought I might use one day, or simple writing exercises I'd done for fun. One of these leaped out at me, and as soon as I collided it with my new opening, I knew they would work together.

Within the hour I had the entire story outlined and started writing it.

A productive weekend, a relaxing weekend. I like those.
Posted by Steve Cameron at 7:17 AM