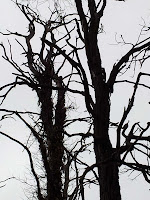 I've written a few times about how they don't bug me as much now as they did when I first started subbing. That doesn't mean they don't still frustrate me, though.

In the past year I've received a few rejections that have even made me laugh. Along with the usual 'well written' and 'just not for us' comments, I had one where it was obvious the reader hadn't actually read the story. The comment referred to an event that didn't occur. I guess the reader probably glanced at the first page while eating dinner and watching some reality program on TV.

I had another one tell me my story wasn't a story. Of course that piece then sold to a much better market, and has since received great comments.

And then there was the one that said that while the story was good, it wasn't SF. Hmmmm. I looked at it again, and realised if I were to pull the SF element from the story, the whole thing collapses. That makes it SF in my book.

These rejections didn't do any more than frustrate me for a minute or so. Of course I pay attention to the comments and suggestions, but I trust my own discernment in deciding whether to tackle to story again. Each of those stories were subbed straight out again at other markets. Different reader, different editor, different comments.

Pffft.  I blow my nose at your rejections.
Posted by Steve Cameron at 3:10 AM