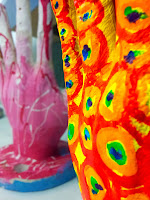 It's closing in on the end of the year.  I've already heard Christmas carols in shops, and seen Christmas commercials on TV. Far too early, in my book. There's still five or six weeks to go which is more than ten percent of the year.

I've already commenced planning for next year at work. I had to make decisions about which 'positions of responsibility' I would apply for, and then submit an application. These are extra roles to my classroom teaching, but we have to take one on anyway.

A tough decision had to be made. Fortunately I think I made the right choice. I feel good about it, anyway. And that's a start.

My horoscope, which I don't usually even look at, told me that in order to have success I needed to make demands and throw a tantrum. I asked my boss if he thought that was a good idea. He seemed bemused, for a moment, then said it was an idea - not necessarily a good one.

I decided not to yell.

We're on the downward run of 2013. Of course I haven't achieved half the things I planned to this year, but that's OK. I achieved a bunch of things I didn't expect to.

But it does feel as though the years are speeding up. I have a good feeling about 2014.

Posted by Steve Cameron at 7:25 AM