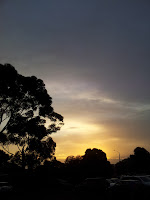 Last year I posted on David McDonald's blog about writing rules and the need to develop your own. I spent a bit of time looking at rules from other writers and found that none of them worked for me or suited my circumstances.

Anyone who has spent some time writing should be familiar with Heinlein's Rules, handed down from writer to writer and treated as though sacred and holy. Generally I find them to be outdated and simplistic.

I've never actually articulated the rules I'm developing (I guess they're more of a 'vibe'). Perhaps they should even simply be guidelines. But here goes, bearing in mind they are appropriate for me and subject to change and development. (I've also posted them on a seperate page, where they may be updated and revised.)

1. Define your goals.
Do you want to be a full time professional? Someone who writes as a hobby? Someone who just wants to see their name in print? Short stories, novels or both? None of these ambitions are any less valid than the others. There are a number of famous novelists who hold down full time jobs still. By choice. But it helps if you are clear in your intentions.

2. Write.
This is one where I agree with Heinlein. Many people intend to write, few actually do. It doesn't have to be everyday, just as often as you can and appropriate to your goals. Don't complain you don't have the time - none of us do. If you want to do something badly enough you'll make the time. I also think the rule about "finishing it" is implicit in this rule. There's no point in only writing opening or paragraphs unless they are exercises for practice.

3. Read widely.
Fiction, non-fiction, news, science, classics, literature, biographies, cross-genre - even genres you would never normally read. Take it all in and let it swish around inside you.

4. Rewrite as required but don't tinker endlessly.
As you progress as a writer it becomes easier to see flaws in your own work. I took an older story that wouldn't sell, a story I loved, applied new learning to it and rewrote parts of it resulting in a story double the original length. It sold, was nominated for an award and has received great comments and reviews. On the other hand don't keep tweaking it endlessly. And don't be afraid to lose words to better the story. Your words aren't that sacred.

5. Let it be read.
I'm amazed at the number of people who want to be a writer but are too scared to show their writing to anyone. I'll admit it was terrifying the first time, but you soon get used to it. Show your work to people, submit it to markets. Get it out there. Isn't that what storytelling is all about?

6.Learn.
Writers' groups, workshops, online classes, writing books, writing buddies and so on. Develop your skills and learn. Everything. Grammar is a good place to start. Strunk & White is very useful.

8. Be part of the community.
Writing is generally a solitary activity. Spend time with the community, both online and in person. Go to conventions, meet people and socialise. It's amazing the doors that will open. Remember networking is important, but networking is a two-way street. It's not just about what others can do for you. If you take and never give you will soon be ignored. Social media is supposed to be social. By all means mention a new release, or a sale, or even the occasional writing problem or word count. But if you're solely on Facebook to promote your work it soon becomes little more than spam.

9. Be professional.
In all aspects of your public life - at conventions, online and when dealing with editors and publishers. I know of several writers whose works I refuse to buy simply because they've been rude or arrogant towards me. And just because you've made a sale doesn't mean you're now an expert on writing or anything else. Don't sermonise, pontificate or put others down.

10. Have fun.
There are times you'll pull your hair out, curse editors and publishers and declare you're hopeless and can't write. But then there are those time you get to hold your newly published work in your hands, or make a sale, or receive positive emails from writers. And there is nothing like the feeling of typing the final full-stop at the end of a piece you just know is the best thing you've ever written.

11. Don't rest on your laurels.
You're best work is not necessarily behind you. Keep writing.

That's what I have so far. But, as I said, it's subject to change and development. And I'm interested in comments and feedback.

And now I return the comment Steve. Great to hear from you after all these years. Funny how life leads us in strange directions. How did you find me?
Cheers
Laurie