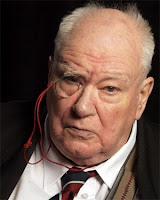 Sir Patrick Moore, a British astronomer, has died at the age of 89.

He joined the British Astronomical Society at the age of 11, and within three years was running a small observatory. When World War 2 broke out, Moore was only 16, yet he lied about his age and joined the RAF Bomber Command as a flight navigator. During his initial training in Canada, he met both Albert Einstein and Orville Wright while on leave in New York.

Post-war, Moore was heavily involved in mapping the moon's surface. Much of this research was later used by both the Americans and the Soviets.

As the Messier Catalogue was restricted to objects in the Northern Hemisphere, Moore created the Caldwell Catalogue. (Caldwell is his middle name) This list of interesting deep space objects is a wonderful place to start for amateur astronomers.

Moore was an astronomer, researcher, author, TV presenter and radio commentator. But I will remember him for his acting. He played himself in the famous Big Bunny episode on The Goodies.
Posted by Steve Cameron at 7:03 PM