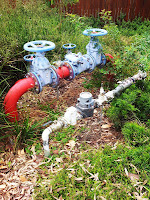 Several months ago I made two sales in the one day. And a few others around the same time.

It felt good. I shared the news. Alan Baxter told me to enjoy it while it lasted, as I'd enter times that were much quieter.  Now is such a time. I haven't sold a story in around five months, and I must admit it's frustrating me somewhat.

Ironically, I've had a story published in each of the past four months - September, October, November and December. But that's simply indicative of the slow moving cogs that is the publishing business. And apart from one story slated for release in March, the next few months are looking quiet for me.

My time will come. A year from now, when I sell a bunch of stories in as many days I'll be telling you of that as well.

Editors. Stop procrastinating. You know you want my stories.
Posted by Steve Cameron at 10:07 AM