A Week That Was. 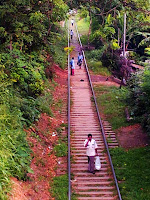 I've written before about how the writing game is a bit like fishing. You throw in a few lines and see who takes the bait. If no-one does, you cast again and wait. A lot of waiting.

No nibbles this week, although one of the fish I'd already landed gave a wriggle in the bucket. The contract arrived for a story I sold a few months ago. Signed and returned.  Does a writer ever get tired of making a sale, signing a contract or receiving copies of a book with their story inside?

I don't think I will.

My computer is finally dying.  The old beast has served me well these past 5 or 6 years, but is starting to fail. USBs keep dropping out and screens keep locking. Even though, it's surprisingly quiet for an old thing. But a new machine arrives today and so I've backed everything up ready for transferring to the new one. Ah, technology. I'm so 21st Century.

Speaking of 21st Century and technology, I'm really enjoying Instagram. I'm starting to build some followers, and regularly hit 35-50 likes on my photos. Feel free to follow me. I'm nihilon.

At home it's been a strange old week. I've been off work for a couple of days with a throat thing. Lots of rest, warmth, lemon drinks and Game of Thrones to watch. I also watched The Phantom Menace, which I hadn't seen since it was first released. It wasn't as terrible as I remembered it, although I can see why it was panned at the time. OK, so a lot of world-building and history-setting at the cost of narrative, but I must admit to having enjoyed large sections of it purely as escapism. At least, a lot more than I thought I would.

On a nostalgic note, I walked past a bakery yesterday and was hit with the smell of warm yeast. It took me back to when I was a primary school kid and we went on an excursion to Harrison's Bakery. I think it was on Canterbury Road in Vermont, and I loved every minute of it. They showed us how they made bread, and even let as shape one each. I hope they didn't sell those ones.

And that smell? It reminded me of the importance of including all the senses in writing, as they trigger recognition with readers.

And no, even though I was tempted I didn't rush in and buy any bread.
Posted by Steve Cameron at 11:20 PM

Hey, for the first time in ages I got to your blog!

Thanks for the tip about including the sense of smell.

When I did a subject with Rachel Flynn at the CAE (Writing for Older Children, I think it was) she advised to always include food in a story. Not such bad advice for adult readers, either.

Great to see you finally got here, Parlance. Welcome aboard.

Someone recently taught me about the importance of your senses in writing, and smell is certainly one of the strongest memory triggers.

It doesn't have to be much, but it connects with the reader.

Glad to see it all worked out.

Good luck with the fishing, Steve. I hope you land a whale.

All seems good at the moment, and the blue skies and slightly warmer temperatures signify spring is coming. And with it I feel a lightening. The last couple of months have been hectic and I've done very little writing at all.

Yes, I hope we land whales. In the meantime, we can have a Whale of a Time.

Spring is good. And thanks for the plug. Not much writing for me either - it's off to work now - though I did just sub a story.