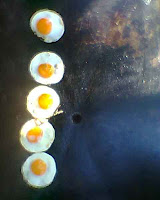 Last week I mentioned my lack of firm resolutions and goals. By that I meant plans as specific as “I will sell x stories this year” and so on. They're great aims to have, but generally outside your control.

That doesn’t mean I haven’t made plans for the year. And although I hate the term “journey” (as in “I’m on a journey”), I suppose if I switched on my WPS this is where I’d see myself at right now.
Let’s see where the WPS shows me at the end of the year.
Posted by Steve Cameron at 2:10 AM