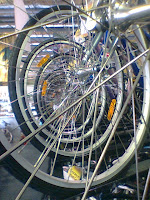 Spring has finally arrived in all its glory. What a beautiful weekend. Which means that for the first time in many months, I had no excuse not to finally tackle those jobs around the house that I've been able to postpone for so long.

A couple of mates came over and we built gates so my dogs can no longer escape. Not that they ever do, but now there's added assurance. I removed an old heating system and replaced the flooring where it once sat. (The room is now so much bigger!) And there were a number of smaller jobs in the garden and on the roof that were finally crossed off the list.

Chateau Cameron is looking good. The only problem is that I really should have been dong story re-writes for my mentor, Paul Haines. He sent me back two stories last week. One is getting closer to being complete, but still lacks something. The other is a ways off yet, and needs a major rewrite. Paul pointed out all the stuff that needs work, and (damn him) he was right every time. It was so obvious once he showed me.

But I have ideas there that should solve a lot of those issues. Until Paul adds more to the list.  Which is fine, I asked him to be strict and he's doing that.

A couple of the bits he picked up on, I'd actually questioned myself. Which means I should pay more attention to my instincts and not include stuff just because I think I should.

Oh well, maybe I'll get a few lines written this week - in between hanging gates and rebuilding skirting boards.

Unless Paul wants to come over and swing a hammer with me.
Posted by Steve Cameron at 11:44 PM