If Only I'd Hung A Mirror In The Corner Of The Story. 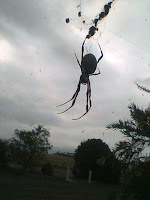 It's back to school tomorrow, but in the meantime I've had a fantastic vacation.

The writing continued well from last week, with another rewrite, and another story pouring out of me. This is another one that's been developing in my brain for a while, but it just seemed to coalesce into existence without too much effort from me. I even drafted it a good three or four times, and then decided it was the one I would send off to Writers of the Future for this quarter.

Of course, with the new online submission process they now have (Yay!) I was able to keep it until almost the last minute, and even received confirmation it was received in time.

Now K.D. just has to recognise it for the piece of brilliance it is. (hehehe)

Above and beyond that, I subbed another story elsewhere.  Things are all go here at the plush Cameron writing studios.

One thing I've been intrigued by recently is what I refer to as the 'Feng Shui' of writing. Like if you hang a mirror in the corner of your room you'll suddenly become rich because the money won't pour out - or something like that. As you can probably gather, I'm not really into it. But writers do something similar after a rejection. "If only I'd added another character in the last scene, or written another couple of metaphors in the opening, or if I'd called him Mike instead of John." That sort of thing, as if a single change would push the story from a reject to an acceptance, or, in the case of WOTF, up to a finalist.

From all accounts, WOTF receives over 2,000 submissions each quarter, with approximately 8 of those becoming finalists, another 8 or so being semi finalists, and forty of those being honourable mentions.  Receiving any of those awards means you're doing pretty well.  I'm not convinced that there is a simple 'fix' in most cases. The story I received an HM for needed a major rewrite, not just a change of name. And even now I'm not convinced the new version would have fared a whole lot better.  I don't know where my HM sat in the imagined HM rankings. Near the top? Near the bottom? If one of the finalists was withdrawn, would mine have been the next in line and pushed up to Semi finalist?

Still, I was pleased that story did as well as it did there. And now it's out on submission and will hopefully be bought at some point. But there were potentially somewhere between 16 and 40 stories better than it. And each quarter I try to write the best story I can. And, hopefully, improve as a writer. One of these days I'll make finalist.

But that will only be the beginning.
Posted by Steve Cameron at 7:29 AM