Moondust And Other Debris. 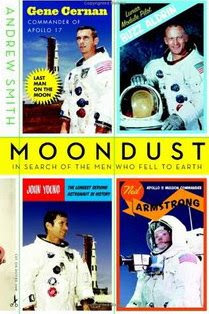 I've read two books this week, one of them brilliant - the other should never have been placed on my desk.

How does a book get published? Surely there are checks and balances in place, some kind of quality control - at least with the bigger companies. I find it hard to comprehend how and why a major and well-respected publisher decided to publish this book. And it was shortlisted for some major award. More than that, this particular book (which shall remain nameless) should not be in bookshops, should not be taught to schoolkids (only because it's rubbish) and should not be put on my desk!

Ok, I admit it. I'm an English teacher with a major in Literature. I've started my honours in the same field and even have dreams of undertaking a PhD one day, so I have some idea of what I'm talking about when I say this crap shouldn't be in schools - nevermind book stores and awards nights.

On the other hand Moondust by Andrew Smith is incredible, although you won't find it in as many bookstores as the rubbish referred to above. While it's not fiction, it is one of the most beautiful, poetic books I've ever read. Mr. Smith has read his Hunter S. Thompson and Tom Wolfe, as the influences of Gonzo journalism can clearly be seen.

Moondust tracks down the last surviving nine astronauts who have stood on the moon and gazed back at the earth. A subtitle could almost be Fear and Loathing in NASA: A savage journey into the heart of the American space dream, as Smith attempts to understand the effect that standing on the moon had on this elite group of flyboys.

Read it. Read it now.

And Mr. Smith, if you're out there, I would love to buy you a drink the next time I visit Norfolk (I spent last Christmas in the UK with a week at Wells-next-the-sea), or if you're ever in Melbourne you are more than welcome to spend an evening or two with my astronomy friends. We sit out in the dark with our telescopes, listen to music, have a drink or two, talk about the Apollo flights and assorted other topics - and study the heavens. Ok, so we might be geeks, but we are geek-chic.

Which brings me back to the question of how books get published.

I've never considered myself to be a great writer (And please forgive me as I write this, I've had two glasses of Merlot and am on my third) but looking back I realise I've had some success.

I've published a number of articles and interviews in fanzines and so on. My very first (and until recently only) short story was picked up by an academic journal. A number of short scripts were published in arts magazines (hi to my partner in script-writing crime) and a stack of my puppet scripts were being considered by a publisher until he closed down after changing careers. (Hmmm, maybe not the best of signs....)

But where and how do I publish a short story? I've decided to start writing again, and would like to get a short story rejected by a magazine or two....

Do magazines even publish unsolicited short stories anymore? Any clues? Any suggestions?

All advice gratefully received...
Posted by Steve Cameron at 8:23 AM