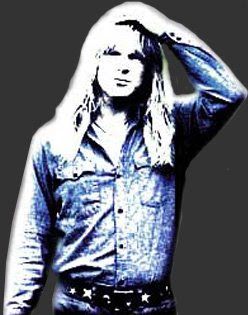 Why should the devil have all the good tunes?

William Booth is supposed to have said it originally. The founder of The Salvation Army would use well known drinking songs and write new words to accompany them to make it easier for his converts to sing along. Larry Norman used it in the 70s as a response to those that thought the church and rock'n'roll should never meet.

This has been in my thoughts this week. I found out a few weeks ago that Larry had passed on a few weeks before. It affected me more than I thought possible. I came home from work and played Only Visiting This Planet, and it moved me to tears.

Larry's death wasn't mentioned in any newspaper or TV report I saw. I didn't even see it mentioned online through any news agencies. I only found out because when I punched his name into eBay, one of the entries included R.I.P. in the description.

Larry was my first concert. I was 15 or so, and he played Festival Hall here in Melbourne. I'd never heard him before, but some older friends invited me. It had never occurred to me that there could be a Christian rocker. The only religious music I knew was quite traditional - the type of vinyl my parents listened to. I'd sit in my room listening to The Beatles, The Stones or Deep Purple in my bedroom on a tinny little mono record player, while my dad would play his music on the 'good' stereo. Not that mum and dad didn't approve. They would even buy albums for me from time to time. But I went to see Larry and became a fan that evening.

In the 90s it seemed Larry went a bit strange. He started talking about brain damage, and saying that every show was his last one. He released lots and lots of stuff - I'm sure there's a Larry album out there somewhere that consists of him making dinner with his son. Having accidentally hit the record button on a cassette player in the kitchen, he suddenly found he had his next album.

I'd spent a bit of time hunting down and buying as many of his earlier releases as I could, so I was disappointed when suddenly there were many many discs on the market, all in limited edition, that I would never be able to collect. I even met him one night in a restaurant in Melbourne. I chatted to him for a few minutes, and asked for his autograph. He told me he wouldn't sign as he didn't believe in 'the Hollywood star system.' I was very disappointed later on when I found out he'd signed items for people all over the place....

But Larry was Larry, and we overlooked these 'eccentricities'. And we thanked him for the Trilogy, and loved SNUTS (Something New Under The Son) and even listened to Quiet Lions.

But now he's gone. I guess he really was only visiting this planet.

I never did find out who Fehrion was or what all those numbers inside SNUTS mean. I loved those little mysteries.

And tonight, when I take my dog for a walk and I'm standing on the corner, I guess I'd better look up the sky in case there's something in the dark......

Labels: Larry Norman, Only Visiting This Planet, Salvation Army, Something New Under The Son, Why should the devil have all the good tunes