Every Silver Lining Has a Cloud. 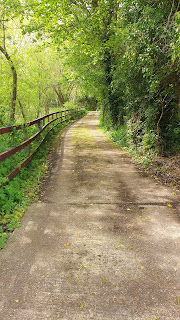 Last week was good. I went to Norfolk for a week, staying in a lovely stone cottage. I managed to catch up with an old friend, ate lovely food, drank some wine, had some of the local beer, and went for walks with my wife and puppy.  I also visited Holt and Norwich, two of my favourite places. Visited some vinyl shops and made some purchases, and generally enjoyed myself on the Norfolk coast.

But, as George Harrsion once famously (and bravely) told some Californian Hells Angels when they came to visit and asked him if he "dug" them, "Yin and yang, heads and tails, yes and no."

Clouds, silver linings, and all that.

Some sobering news, some plans gone astray and some other disappointments. It all balances, doesn't it? At least, I hope it does.

None of this is world shattering, and there are many in far worse positions.

I woke up this morning to a rejection. Due to circumstances, I haven't submitted any stories for a while, but I managed to get this one out during an extremely busy time. I watched as Submission Grinder and Duotrope counted down through their recorded submissions, until there were very few left standing. I started to have hopes I was in the last few, which it turned out I was. Unfortunately I didn't quite make it past the very final cut.

How final? The Table of Contents was announced within a couple of hours of my rejection being sent to me, and I saw the TOC before I'd managed to check my emails.

This is a story I love, and a publisher I regard highly, so it was disppointing to say the least. But I managed to receive a personal and quite lovely rejection.

But onwards and upwards, send it out again, and hope for the best.