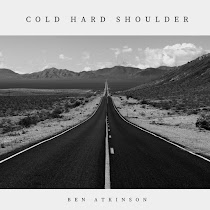 I've written about Ben Atkinson before. I first met Ben a year or so ago, and then was fortunate enough to start working with him shortly before lockdown. We've become good friends, and share interests in music, theatre, technology and the arts.

During lockdown, Ben spent time in his home studio and recorded a number of songs he wrote during the past ten years. While Ben's main interest is in country music, and he has run a weekly country music radio programme for many years, the songs he recorded have eclectic influences. The topics, ranging from lighthearted digs at local government through to the tragedy of war, reflect Ben's life, interested and view of the world around him.

Ben asked me to record some guitar parts for this album, and I am honoured and priviliged to have made the final mixes. We had a lot of fun recording my parts - a few laughs, some great food and lots of sweat - it was a terribly humid evening when we went into the studio, so forgive any bum notes as I had a tough time keeping the guitars in tune.

Ben is donating all profits to the NHS. The album was launched last night, and is available as download, on CD, and even vinyl.