Our Own Exclusive Spheres. 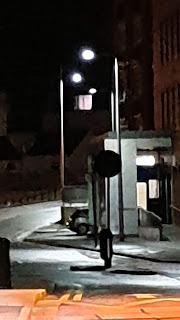 As a teen, I remember spending hours perusing the racks in the record shop before handing over my saved money to purchase an album. Once home I would throw it onto the turntable as soon as I could, and sit and read the album notes. Anything, in fact, that was on the cover, the inner sleeve and even the copyright notices on the label.

The names seemed strange, exotic. Pink Floyd, for example, were Waters, Wright, Mason and Gilmour. There were no photos of the band, they didn't appear on Countdown (Australia's music programme), I didn't have any books about them - I simply had to imagine what they were like based on the music.

The same with Steeleye Span. The first of their albums I bought, Commoner's Crown, had pictures of little figurines, with their names alongside it. Vocals by Maddy Prior. I'd never heard the name Maddy before, and I must admit I imagined the band as living in some kind of medieval village as minstrels.

There was no internet, no way for a lad in the suburbs to learn more about these artists. I knew about the Beatles and the Stones from TV and books, but the libraries and shops I went to didn't have books about anything other than the most popular of bands.

I never dreamed that one day it would be possible to make contact with my heroes, or even to have conversations with them. We moved in orbits in our own exclusive spheres. These days, those spheres can touch.

Recently, I ended up having an online chat with one of my guitar heroes. A guy I listened to in High School, and loved. And when I started playing guitar, spent hours working out a couple of his riffs. And yet, all those years later, here I was having a chat as he shared a few little bits about the album I didn't know.

Also recently I had 'likes' and comments from another hero.  It is a strange, strange feeling when that happens.

The world is a smaller place, because of the internet, and our heroes are now within reach. Sometimes, it can be terrifying for them. We read of celebrities chased from Twitter or Facebook by a rampaging mob carrying metaphorical pitchforks and flaming torches. Some have had mental health problems following harassment by the public.

I just hope that I was respectful, and am extremely appreciative of the time given to me.
Posted by Steve Cameron at 5:01 PM