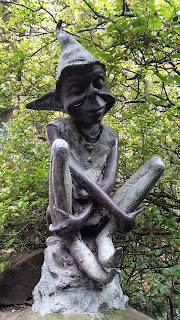 I've been to conventions before. I used to attend Continuum every year in Melbourne, visited Conflux once and even managed to get to WorldCon a couple of times. Since moving to the UK, I've been to a couple of Edge-Lits and a few Sledge-Lits, the winter counterpart. But I haven't really immersed myself in the British SF scene.

Scene. I choose that in place of a better word instead of 'Community'. Ah yes, the 'Myth of Community'. I am planning to write about that soon, but I'll leave it as it is and just move on for now.

Last weekend I visited Chester for FantasyCon. I was hoping to catch up with old friends, make some new ones and even meet a hero or two. And I succeeded on all counts. It was wonderful to see Philip and James again, to spend time with Penny, Simon, Adele and Tom (as well as a bunch of others I haven't mentioned), and to chat, albeit briefly, with Ian Watson. Ian is a fabulous writer, someone I started reading back in the late 70s and never dreamed of meeting. I managed to get a book or two signed, and even copped some written abuse from him in one of them - which was pretty special.

I spent time chatting with Dr Abbey from Japan, even though my Japanese was rusty and he was polite about my abilities, and met Ian Whates and Adrain Tchaikovsky, who were both delightful and fascinating.

Restaurants, bars, sitting outside with friends, walks, and even listening to the karaoke (bleah) made for a memorable weekend.

Seriously though, how do we manage to spend an entire weekend based in a hotel and still not catch up with people we know? I missed a few people I had planned to see. And they were there! I've seen the photographic proof.

If you haven't been to FantasyCon and you live in the UK, it's highly recommended. I plan to be there next year again.

Posted by Steve Cameron at 5:37 PM