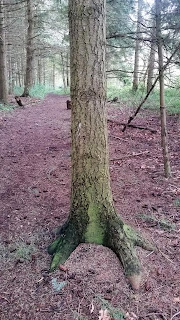 I've had a good run of ideas for short stories recently. Some are merely snippets, some are almost fully fleshed. All have gone into my writing journal.

I have no idea how many will end up getting used. I never do. And some that do get used end up being more of an inspiration, or a launching point, rather than the original idea. A piece of conversation I overheard on a plane (and noted because it was so ludicrous) will get used, but even the original conversants would never recognise it. It was idea of the silliness of the conversation I loved, even though the participants were earnest and serious.

One of the ideas has already developed into a few paragraphs, and I'm enjoying writing this one. It's a comedy piece based on an idea I originally had about a year ago, but mashed it with another idea I had a week ago. And they fit so well together it is as if it was meant to be.

Writing comedy is difficult. Humour is so subjective that you can never be really sure how well it is working until a range of readers tell you. I've been fortunate in my attempts, and my biggest sale was a humorous piece which garnered good reviews, comments and even a mention in a recommended reading list.

But the main thing is the ideas have been flowing, and I'm working at whipping them into shape and pushing them out into the wild world.