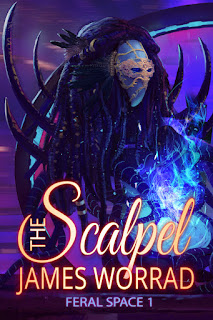 We stayed in touch online, and then when I moved to the UK, we continued to stay in touch online. Although James lives about an hour from me, we rarely manage to be in the same room together. From time to time we catch up, and can I just point out that he continues to be as bad an influence as he ever was.

He is corrupting, naughty, and sometimes very funny. Oh, and he is a writer.

His first novel is out. Or about to be out. Or something like that. The Scalpel is the first in him Feral Space series, and draws on the weird story of the Gibbon Sisters. Now this is a case I am actually familiar with, and I love the idea James has put it to good use.


"Eerie as heck but oddly moving. The two girls couldn’t function apart but knew they were consuming each other’s identities as time progressed. They announced one of them would die and, hey presto, one of them did that very day, just collapsed in her sister’s arms. Feral Space doesn’t go that way, but I wanted to take the twins’ predicament to an extreme: two sisters sharing a single body and presenting themselves as one to the rest of the world. The idea of showing that in a novel set my keyboard alight."

Keep an eye out for James, and if you see him around take pity on him and throw a few pounds in his direction.  Seriously, buy this book.
Posted by Steve Cameron at 1:10 PM