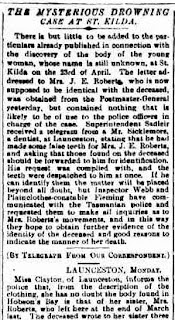 I'm thrilled to have been included in this fantastic publication, and completely delighted by the great reviews that have been popping up.

Peter Craven gave us an excellent review in The Australian. And although I was pleased to have had my story mentioned, I am disappointed they got my name wrong. Peter, if you're reading this I'm sure it was an error of dictation rather than your writing.

Yep, I was referred to as Steve Connor. Despite a couple of emails to The Australian, simply asking if they can amend the online version, I have not received a reply and it is still attributed to the elusive Steve Connor.


"The style of the anthology is weirdly geographical and continent encompassing with all sorts of outback stories and stories set under, say, the unaccustomed blue Adelaide sky to balance the ones set in the vicinity of Mrs Macquarie’s Chair or about drowning in 19th-century St Kilda (this last is by Steve Connor and apparently is based on a true case and has Holmes and Watson set out to investigate from their rooms in Fitzroy)."

And it is indeed strongly based on a true story. Try googling The Mysterious Drowning Case at St Kilda, or The Melbourne Morgue Mystery. This was the case which resulted in the police at the time purchasing their first camera.


"Sherlock Holmes: the Australian Casebook is born of the lust for idle pleasure and the desire to perpetuate and cash in on a myth that keeps on giving. There are a lot of Christmas stockings that will be happier for this book."

Fantastic to be mentioned, I just wish it wasn't Connor. I've heard he's a hack!
Posted by Steve Cameron at 2:33 PM