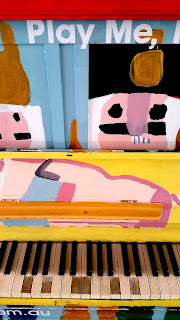 I'm alternating my reading at the moment, a bit of non-fiction between the fiction. A couple of Spec-Fic magazines thrown in for good measure. Lots of short stories, as this is the form in which I've been writing thus far. But in my non-fiction moments I've been getting back (ha! - get it?) into one of my great loves, The Beatles.

If I had to choose only one band that I could listen to for the rest of my life, then it would have to be The Beatles. I've been listening to them since I was a kid, and I never tire of them. There's a lot of music that speaks to me in ways that other artforms cannot, but music by The Beatles does so more consistently and more meaningfully than most.

But as a whole cultural phenomenon that came to represent everything about the sixties, I find their story fascinating. And so I read about them. A lot. I probably have more books about The Beatles than on any other subject.

It's been a while since I've read much about them. The last few months has seen me read three or four Beatles books, and I've loved every second of it. Insights, different viewpoints, little tales about meeting them, seeing them, descriptions of concerts or events. And every now and again I find something that I didn't know about, something that stuns me, impresses me, or just makes me jealous I wasn't ten years older. Makes me wish I'd lived the sixties as a teenager and managed to see them live.

But I have my little Beatles moments I cherish. Standing next to a guy as he was opening all the mail addressed to George Martin. Sitting at the console in studio two where they recorded just about everything. Touching the keyboard Billy Preston played in the Get Back sessions. Playing the piano Paul used on Lady Madonna. Standing at the Strawberry Field gates in a mist so magical and mystical I half expected Lennon to walk towards me.

There truly will never be another band like The Beatles. At least not for me.

Check out my Beatles page here.
Posted by Steve Cameron at 12:20 AM