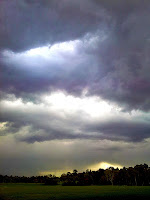 I've recently had a number of people suggest that it's time I compile an anthology of my own stories and publish them on Amazon, or Smashwords or whatever.

Anyone who knows me will no doubt be aware that I am quite averse to self-publishing my stories anytime soon. I recently had the opportunity to read a couple of self-published stories and was generally underwhelmed by them. As I've stated before, I recognise that traditional publishing values are shifting rapidly and the future world of e-books is wide open, but there's still too much white-noise out there at the moment. How we end up filtering this and finding the gems is yet to be determined.

Amazon reviews are of limited value. Some of the stories I read had been given a number of 4 and 5 stars, but were actually poorly written. (To be fair, I have also found one or two that were pretty good.) I believe that it's wise to reach a certain standard before inflicting your work on others. For me, that standard is a couple of professional sales and regular appearances in semi-pro markets. I'm working at building a reputation, and editors and respected publishers are the benchmarks in reaching that goal.

If others will invest time, effort and money in regularly publishing my stories, then perhaps it will be time to put together a collection. But in the meantime, I'll let the editors judge my work. After all, people keep telling me writers are rarely the best judges of their own writing.
Posted by Steve Cameron at 2:24 PM