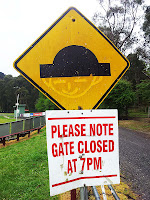 I've attended some fabulous panels at conventions where the discussion has centred around the factors that make a piece of writing 'Australian.' Invariably these panels have focussed on the image of our landscape in writing; how dry, barren and hostile the country is. In general I agree with this sentiment. Henry Lawson, for example, recognised and utilised this. You only have to read his collection of short stories to see how dangerous the Australian outback can be.

But I realised something a few days ago. In the past 40 years I haven't had too many problems with snakes, bushfires or floods. And apart from driving, or the possibility of being mugged as I walk to my car after school, the most dangerous thing I regularly face, and the worst injury I've recently sustained, has been the result of stubbing my toes on furniture at home. (And, in complete honesty, it's happened a lot more than once)

Coincidentally, (or perhaps in synchronicity), I read an excellent interview this morning in issue #1 of Aurealis Magazine (1990) with 'Australia's Grand Master', George Turner. Written by Dirk Strasser, it looks at Turner's views on Science Fiction, literature, and the 'Australianness' of writing.

Here is part of the article:

Unlike many other Australian science fiction writers, he makes no attempts to ape American models (we shouldn't "give in to them," he says), nor are they set in a vague never-land. "I Still Call Australia Home" takes place in a future Australia, and is, like so much of his work, specifically set in Melbourne. "I use Melbourne because I'm a Melburnian," he says, "always have been."

George Turner is at his most passionate when talking about the uniquely Australian element of science fiction. You can see it in his eyes - not an overstated, hot-headed passion, but a passion nonetheless. There is the same pride when he writes in his autobiography of the possibility he has an Aboriginal ancestor. His fiction is deeply rooted in his environment; his Australianness is not a superficial gloss spread over a standard plot, it is essential and all-pervasive. "Australianness," he says, "is not a matter of familiar names and places - and mentioning wallabies and kangaroos and Ayers Rock doesn't get you anywhere either.  It's the sound of the prose. The English speak like Englishmen, the Americans speak like Americans - and Australians speak like Australians. Australianess is an attitude of mind. We think differently about things; we react differently to things."


The largelly ignored CJ Dennis nailed this. Songs Of The Sentimental Bloke brilliantly captures the Australian language, character and setting. It's a complete tragedy that his work is mostly out of print and forgotten while Henry Lawson and Banjo Patterson are so highly revered.

Of course there will be times when a story is written to suit a foreign audience. I've done this myself when subbing to American editors. But at the heart of the story, at its core, I'd like to think it is clearly Australian.

My writing is, after all, a reflection of my experience, values and culture. And despite my Scottish birth, I am Australian.
Posted by Steve Cameron at 3:44 AM