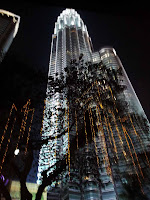 The rejections are mine. The successes are not.

I recently had two stories rejected from markets that I thought were a sure thing. The stories are good, the writing sits squarely amid the best I've ever done, and both stories fit the guidelines like a well worn glove. Unfortunately, the editors / slushreaders disagreed.

It's been a very long time since I felt down about a rejection. I usually just cop it on the chin, send the story straight out and forget about it. But these two stories were with markets that I really want to break into. And I've suddenly realised these rejections are bugging me more than I should let them.

One of the markets I find frustrating, as they usually have a rapid rejection process but this time took four weeks. I take this to mean they weren't initially sure - but I received no comments back so I don't really know. (And yes, they are rapid - my best ever effort with them was 17 minutes! - which I thought said more about the slushreader than me. Especially since the critique (two words) made little sense.)

The other market I at least received some comments from (even if I disagree with them - hehehehe), but I find that market a little frustrating too, as the last time I was rejected there they then published stories which were clearly outside their own guidelines thematically.

Still, they can choose whatever they want to buy. For some reason my story didn't grab them, and I just need to accept that.

On the other end of the spectrum, I continue to publish reviews with Dark Matter. (simply email 'subscribe' to darkmatterfanzine@gmail.com) Elsewhere I have a story on hold, my friend Gitte Christensen has a story on hold at a pro-market, and a whole bunch of Australians and New Zealanders made the Locus recommended reading list for 2011. In fact, we're proportionally over-represented, considering our population.

and the following short stories:

Ah yes, Spec-Fic is very healthy down under.  That doesn't mean I can't wallow in self pity though.
Posted by Steve Cameron at 11:19 PM

Chin up, Steve. All will be well again when you get that next sale. And there will be sales, many wonderful sales, although, alas, there will also be many rejections. So it goes for all of us :)

And thanks to the others that emailed me privately.

Now, I don't want anyone to think I was in a state of depression - I was bugged, annoyed that those two markets didn't take my work. And I understand completely they can and will choose the stories they want. I think I was just amazed at how much those two rejections hurt because I'd wanted the sales so much.

But those stories are out again. We write, we send, we wait and repeat. It's what we do.